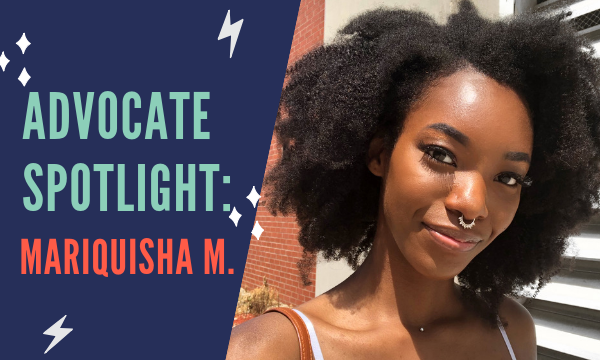 The All-Options Talkline has some of the best volunteers around, so we think it’s important to uplift these incredible folks and highlight what motivates them to lend their time and service to our callers! Mariquisha has been a Talkline Advocate for more than two years, and we were eager to hear about the wisdom she’s gained through her experience. Read on to learn more about Mariquisha and her work on the Talkline:

How/when/why did you first get involved with All-Options and how long have you been volunteering?

I became involved with All-Options in 2017. I was wrapping up my undergraduate degree and needed an internship for the summer. A representative from All-Options was tabling at a “Cupcakes and Condoms” event at my school. She talked to me about reproductive justice and abortion rights. Both issues were foreign to me at the time, but I decided to get involved so I could learn more. I’m glad I did because not only has this work become very important to me on a personal level, it has also helped me flourish as an individual by being able to determine my own ideas and perspectives about pregnancy options.

What’s your favorite thing about being on the Talkline?

When volunteering on the Talkline, you listen to a lot of callers explain their experiences with a heavy heart. The heaviness of their heart is often heard in their voice. You can hear the silent crying, their pain, and their grief as they explain what they have been going through. In those moments, you’re worried that you won’t be able to help this person journey through those emotions. Then you begin to talk to them by listening to their story and validating their emotions. At the end of the call, you can audibly hear their sigh of relief, sort of like the largest weight has been lifted off of their shoulders. That’s my favorite moment because I know, even if it’s just for a short period, they feel better about their situation. They feel heard. I know that feeling so much and I’m very grateful to be able to help someone else get to that moment of contentment.

I also love that we let callers feel whatever they want so they can embrace their emotions and make the choice they feel best suits them at that time. There aren’t many spaces for people to grieve a miscarriage or grieve an abortion (because that’s normal too) or contemplate honestly with themselves about their pregnancy options. When I take a step back and think about what the Talkline gives to those who identify as women (and men as well), I’m amazed and I have a bit more faith in humanity, as corny as that sounds.

What has surprised you most in your work on the Talkline?

The aspect that has surprised me the most in my work on the Talkline is the callers. When joining, I already had expectations about what I would experience. In my mind, I felt I already knew the type of person who was going to call and what their stories were. However, I was very, very wrong. I quickly learned that the narrative in my mind, that most callers will be young women who are unmarried and financially unstable, was wrong. I had already placed the callers into categories and given them stereotypes. I was surprised to learn that yes, some of the callers do fit that description, but many do not. Many are not teenagers nor in their early 20s. Many callers are also married or with a long term partner. Some are lower income and others financially well off. As a novice to the abortion and reproductive justice arena, I learned that there are many stories surrounding abortion, pregnancy, and miscarriage. Looking back, I’m low-key ashamed that I had such a fixed perception, but I’m very appreciative to have grown since then.

Why is an all-options approach to reproductive health and support so important?

All-Options’ approach is centered on being nonjudgmental, unbiased, and caring. Reproductive health is already surrounded by stigma and so much negative energy. Currently, there’s been a lot of restrictive abortion laws, policies and bills shamefully being introduced into the US legal system. Not only about abortion, but about comprehensive sex education as well. So, having an organization like All-Options focused on autonomy for pregnant individuals is amazing and 100% needed. Many callers live in towns, or have close friends and family members, that stigmatize abortion. All-Optoins’ approach and our work on the Talkline lets people come to terms with their own emotions, and not just focus on the ones they are told to feel. Supporting abortion options and contraception for all is supporting people taking ownership of their bodies. That’s beautiful.

Tell us something about yourself that might surprise your fellow Talkline advocates.

I have never seen an episode of Friends. Or Game of Thrones. Or some of the other popular tv shows.

What is your favorite thing to do for fun?

I like to enjoy my down time. Reading, sleeping, and watching movies. Too much emphasis is placed on going places and doing things as being productive and having fun. I just like to chill.

If All-Options’ mission were achieved and all people had the support and resources they needed for pregnancy, parenting, abortion, and adoption experiences, where would you volunteer your time?

I would probably volunteer my time with sexual assault survivors. Such a heavy topic also needs a caring and nonjudgmental approach.